NuEnergy offers a first generation alkaline fuel cell, developed by Apollo Energy Systems.  While this fuel cell is fully functional and commercially available, there are limitations to its applications because it requires the use of ammonia and a catalytic converter.

In developing a desalinization process, NuEnergy engineers discovered that the process also produced substantial quantities of hydrogen that could be captured and put to use.  In short, NuEnergy discovered a viable way of producing a high volume of hydrogen; with a high energy coefficient of performance, from water. NuEnergy began developing a method to utilize this sustainable reaction to create and capture hydrogen gas for use in a fuel cell.  This second generation fuel cell will not involve ammonia and the catalytic converter and solutions would be stored in separate containers.

The NuEnergy discovery was that the proximity of two unbalanced, oppositely charged solutions, passing through an aluminum membrane, created a sustainable reaction whereby the elements of H20 are separated into gaseous hydrogen and gaseous oxygen. The depleted solutions can flow out of the containers through the fluidic connections and operating valves. However, to maintain electrical separation during the process, the header cannot be used as long as there are unbalanced charged ions remaining in the solution 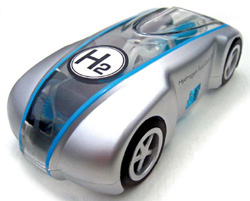 The second generation NuEnergy Hydrogen Fuel Cell will be an ideal source of power for electric vehicles.  The fuel cell charged ion solutions can be stored in vehicular fuel tanks at atmospheric temperature in much the same way as gasoline or other conventional fuels are stored presently in fuel tanks.

NuEnergy intends to work with Apollo Energy Systems in bringing about the catalyst for embracing the Hydrogen era, the viable release of Hydrogen (H2) from water and its subsequent use for economically producing electric power.

Fuel cells are very useful as power sources in remote locations, such as spacecraft, remote weather stations, large parks, rural locations, and in certain military applications. A fuel cell system running on hydrogen can be compact and lightweight, and have no major moving parts.

Because fuel cells have no moving parts and do not involve combustion, in ideal conditions they can achieve up to 99.9999% reliability. This equates to around one minute of down time in a two year period.

NuEnergy may also be working with its partners at the University of South and Central Florida and the Instituto de Investigación de Electricidad in Cuernavaca, México to refine and improve the existing fuel cell. This unit will provide a residential and industrial base load.