Three main problems plague the widespread use and rapid deployment of photovoltaic (PV) panels based on current solar technologies:

– High cost to manufacture, resulting in a high cost to end users.
– Inefficiencies inherent in the core technology of PV panels in converting  light into electricity.
– Limitations in the applications of PV technology, such as its inability to  work in the dark or convert heat to energy.

NuEnergy Technologies is developing a core technology that will revolutionize the solar industry, solve each of these problems and provide the impetus for expanded use of solar energy. This is Heatseeker3, a Thermal Electric Generator. 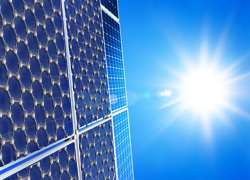 HeatSeeker3 converts thermal energy (heat) into electrical energy.  HeatSeeker3 will be more efficient, less costly and have more applications than current PV products. Heatseeker³ can work in the light or dark, requiring only a conductive, convective or radiant heat source. PV products do not use heat to generate energy; in fact, heat is the predominant factor for PV’s low conversion efficiency.

Heatseeker3 can be assembled into a solid-state module similar in appearance to a PV module. A HeatSeeker3 solar panel would achieve an efficiency of ~50% as compared to the ~16% (+) efficiency of most current photovoltaic panels.

The cost to produce HeatSeeker3 panels is anticipated to be ~50% less than of the cost of high-end PV panels.

HeatSeeker3 can also take advantage of what is now the wasted burden of excess heat capacity created beneath moving mass transit subway cars, or by furnaces and other heat producing equipment in industrial plants.

–  HeatSeeker3 allows for the excitation of electrons to be absorbed by nano-technology capacitor circuits and released to rectifying diodes, thereby producing a current flow.

– Power generation increases as the microscale gap is reduced.

– Energy can be produced from a heat differential of at least 15 degrees.

– Product capabilities have been validated through bench testing.

Heatseeker3 will be used for solar power in both home and commercial structures as well as solar farms. With the efficiency and price point of Heatseeker3, “solar farms” become very attractive as a means to produce green energy on a mass scale.

Steam power plants using fossil fuels for electric power generation are limited to 40% efficiency. Were Heatseeker3 to complement fossil fuel use of this nature, operating furnace temperatures of 1700ºF could be achieved and would enable power conversion efficiencies to reach 80%.

The reversible cycle resulting from the minimization of thermal losses enables the same thermal cycle to be used for power in heat pump mode as in refrigeration mode.

By using both the wasted heat from initial combustion (topping) and the wasted exhaust heat (tailing), the efficiency of other types of power in industrial plants can be significantly increased.

Heatseeker3 in space power stations will provide high solar output power per unit weight of the micro modules and also provide a significant weight reduction over the silicon solar cells that are currently used in existing devices.