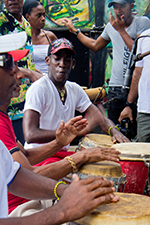 The Washington Times, (7/2000)
Editorial Section, by Antonio Benedi.
(Benedi serves on the board of directors of the Patrick Henry Center for Individual Liberty.)

The people of Cuba have a long history of respect and support for the United States .

Cubans, as a people, helped raise much-needed funds for the Revolutionary Army of George Washington. “Havana’s Ladies,” a group of Cuban mothers, heard General Washington’s plea for desperately needed funds and raised an astonishing amount for that time. They sent to Virginia the equivalent in today’s money of $28 million. This has received little exposure in American history books, but is well documented. The inscription that the “Ladies of Havana” wrote on their contribution was: “So the American mothers’ sons are not born as slaves.”

The pledge of Havana ‘s Ladies, remained very little known, with the exception of an American historian Stephen Bonsal, who wrote: “That sum collected [by the Havana ‘s Ladies] must be considered as the ground whereon was erected the American independence.”

Gen. Jean Baptiste de Rochambeau wrote in his “Daily Memoirs,” available in the Library of Congress: “The joy was enormous when it was received, the money from Havana: The contribution of 800,000 silver pounds which helped stop the financial bankruptcy (of the Revolutionary Army) and raised up the moral spirit of the Army that had began to dissolve.”

Carmen Maria Rodriguez has also done research into this chapter of the Revolutionary war. She writes: This July 4th, New York will be scenario of the largest maritime event in the history of humankind. In this regard, the city, and the nation are outdoing themselves to stage along with simultaneous fireworks, one of the most impressive displays of popular joy and freedom ever staged commemorating a nation’s freedom.

Being Cuban born and living within sight of the Statue of Liberty, I cannot help but think of who and what made this possible. My mind races back to a demonstration held in New York by Cuban Americans when someone handed to me a piece of paper in which the former US Ambassador to Cuba Stephen Bonsal wrote, “The Contribution of Cuban women by way of their jewelry, could very well be the foundation on which is founded, the freedom of the United States”. Bonsal, having lived in Havana , also penned a book: “When the French were here”.

General George Washington had a dream to liberate the colonies from the English. He also had a band of mercenaries whom to pay, since he relied on these type of soldiers to wage the war which he felt was just and necessary.

The French were here in the colonies helping out, and given that there was no money to finance the mercenaries or the war, Lafayette commanded the frigate known as “L’Aigrrette”, to travel first to Cadiz, Spain, to see if money could be gotten. To no avail, the Spanish in Cadiz were very kind but not financially forthcoming. The ship then went on to Saint Domingue, what is now Haiti, and what was then the richest of all colonies given the enormous wealth to be had in the sugar industry. The French there told the French on the ship, “Nous n’avons pas d’argent”, in other words, there would be no money from Saint Domingue sent to Washington . L’Aigrette then set sail to the Port of Havana to obtain water and supplies to return up to Virginia empty handed. It was there that word got out, that Washington needed funding to stage a battle which was at the time only in the planning stages. Women, girls, from Havana to Matanzas to Pinar del Rio gave freely of their jewelry. The French even documenting that they disposed of their diamonds, to help Washington in his quest for freedom and the financing of his mercenaries.

The women of Cuba came forth, knowing that this was a just cause, giving up of their only wealth, which was their jewelry, to assist the love of independence of another nation.

When L’Agraitte set sail and arrived in September of 1781 in Virginia, General Washington upon knowing that there was sufficient financing of over 1,200,000 pounds of Cuban gold, silver and diamonds, historians point out that he lost his usual sedate composure and threw his hat in the air from sheer joy.

“May God bless the children of these Cuban women who loved their own freedom, but knew that the cause of liberty and justice is one to be pursued at all costs everywhere in the world where there is need for such a state of affairs.”

When New York rejoices this Fourth of July, I too in a way shall rejoice doubly, since it was our Cuban ancestors, and despite all the disdain many feel for this land, that made possible, the freedom and bounty of so many. And by writing this, I hope to start waking up people’s minds that Cubans even today as in 1781 maintain their unique tradition of defending freedom above all else.

2 thoughts on “People of Cuba”